A short set of visuals documenting the build of my first open source hexapod robot – Randall the First. Shout out to ArcBotics for being awesome. 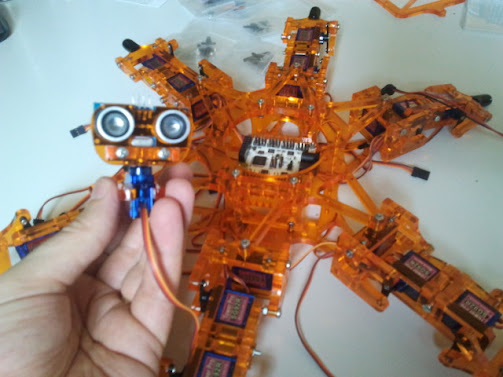 Summer. Climbing Cradle Mountain under a roof of clouds. Fivefinger barefoot shoes and sharp rocks do not go so well together.

Unpacking an Arduino starter kit for a project involving a tweeting door. But this is already autumn.

Summer. Away from internet, sociability, strangers asking ‘how are you today’, institutions, serious faces and comic intrigues, all the petty drama of bureaucracy. Instead, books.

Books as an intoxicating pleasure. Drinking in one go Jesse Bullington’s The Folly of the World [not so good, now only faint traces of the epic Brothers Grossbart remain], and Hugh Howey’s Wool [brilliant, delicious, exciting, best scifi cocktail in years]. Then at a leisurely pace Gwendolyn Leick’s Mesopotamia [intended as an overview on Sumerian/Babylonian city life it went sour somehow and now tastes as a textbook], to be followed by a deep breath and Robert Massie’s Peter the Great [fantastic book about a flaneur of singular proportions, to be consumed in large gulps, standing solidly and staring at the moon]. Then as a dessert, even slower, and with a lot of succulent side-reading, Nassim Taleb’s Antifragile [probabilistic theory as philosophy of life, served in a wonderfully the-bar-is-closing sort of way].  Taleb brings closure and understanding. For the strong of spirit however, he could be followed by Ludwig von Mises’ original 1912 edition of  Theory of Money and Credit, to be consumed very slowly, preferably before sleeping, with one eye on the eternal.

Autumn. Meetings. Early meetings, late meetings, postponed meetings, important meetings. Workshops too. And seminars. And workshops about grants, the purpose of which is explained in seminars, invitations to which are given at meetings.

Being invited to a meeting by omission. How is that even possible. The institution thinks someone else is doing what they’ve been paying you to be doing all along, and invites that person for a meeting, but then the person tells them that it is you who in fact is doing that, so they then invite you too but during the meeting keep showing ignorance of what is it that you are in fact doing. Invitation by omission.

Bumping into a colleague who complains of divergence. No focus. Must converge.

Teaching convergence to the generation born in the air of excitement surrounding Netscape Navigator. Fun, actually.

Unpacking a hexapod with proximity sensors for eyes. The orange blue-tooth monster. Is his name Randall?

Thinking of objects as data. Objects transitioning from a primary reality to liquid assemblages of data in algorithmic space. The tweeting, relentlessly sociable door. Sociable objects.

Where is that von Mises book?

This work is licensed under a Creative Commons Attribution-NonCommercial-ShareAlike 4.0 International License.